I have a confession: I’ve never eaten corn beef and cabbage, or corn beef hash. I haven’t a clue what either taste like. I see hash a lot on breakfast menu’s when we go out to eat, but I have shied away from ordering it since I didn’t know what corned beef was.  I’ve seen co-workers bring canned hash to work and eat it for lunch, let’s just say that it never looked or smelled appetizing! Quite the opposite of appetizing actually. As a result canned hash has become the equivalent to canned spam in my head–an anomaly. I haven’t a clue what spam is, and have yet to meet anyone who can enlighten me on what it is. Being that I am the queen of food transparency, and need to know exactly what I’m eating at all times, I  just avoid it altogether. I was discussing wanting to try to make a hash with a friend, and she suggested I try it with an alternative to corned beef. She makes her hash with ground meat or sausage and suggested I do the same. So I decided to try to make hash with kielbasa. I’m so glad I did, it’s delicious! I can’t believe that I waited so long to try hash.

1 teaspoon of fresh or dried thyme

14oz of brussle sprouts bottom stem removed, and sprout slit down the middle

Directions: Pre-heat the oven to 400F. Line a baking sheet with foil and give it a spray of coconut oil or olive oil. Add brussel sprouts, season with sea salt and pepper and drizzle with 1 tablespoon olive oil or coconut oil, cook for 7-10 minutes or until the brussle sprouts brown a bit, remove from oven and set aside. Boil the potatoes in salted water for 5-7 minutes, just until you are able to pierce them with a fork, they should still be very firm, drain and set aside.  Add the kielbasa to a cast iron pan and cook until brown, remove from the skillet with a slotted spoon and set aside. Add the onion, garlic, and bell pepper to the skillet with the remaining oil from the Keilbasa, sauté until onion becomes translucent. Add in the potatoes and 1 tablespoon of olive oil, and cook until potatoes take on some color (7-10 minutes) add in the browned kielbasa, thyme , sea salt and pepper and toss well. Serve the hash with the Brussel sprouts and enjoy! So yummy! 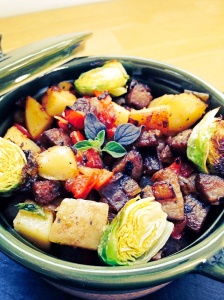 Do you know what spam is?