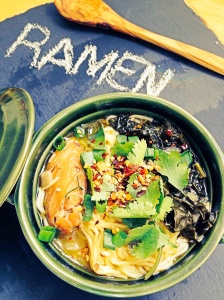 Is it weird that I’m not a big fan of pasta, but that I love ramen? I’m not talking about cup o noodles here, but growing up I had my fair share of those, I’m talking about a rich and flavorful  bowl of ramen. The kind of ramen one might get at David Changs Momofuku Noodle bar in New York.  The kind of ramen people wait in line for, only I don’t want to wait in line. The beginning and end of any ramen–a good one anyway–is the broth! Without the foundation of a good broth, ramen is… well just ramen in water! The best way to get a good broth without spending hours in the kitchen is to use a pressure cooker. Pressure cookers aren’t as popular as crock pots, but in my opinion they should be! Other than cooking something slowly on the stove for hours, there is just no other way to get the amount of flavor you do from something cooked in a pressure cooker. You get out what you put into a pressure cooker, all the nutrients stay in the pot, they don’t cook out, unlike when you cook on the stove top, or in a slow cooker—the nutrients escape out during cooking through steam.  What’s better is that it takes less time to do it than both stove top cooking and crock pot cooking! I like to think that my pressure cooker provides the best of both worlds, the flavor of something cooked for hours on a stove, and the ease of non-active cooking–ie ability to throw a bunch of ingredients in a pot, leave it for an hour and come back to the finished product, lazy cooking at its best!

1lb of Organic chicken thighs, I used boneless, but a bone never hurt a good broth

1 tablespoon of olive oil or ghee

Directions: Heat the oil then add the chicken. IMPORTANT: Let it brown, do not move it, let it cook for 3-4 on one side before turning it. This browning makes a tremendous amount of difference between a broth that’s good, and a broth that’s great! Once brown turn over and add the onion, garlic, soy sauce, and vinegar.  Cook for another 4 minutes, then add the water. Bring to a boil, then cover and seal your pressure cooker, and let cook on medium heat for 45-50 minutes undisturbed. If you’re doing this on the stove top, without a pressure cooker, bring to a boil, cover and cook for 1.5 hours checking broth levels after an hour. At the 50 minute mark, turn off the fire, and depressurize your pressure cooker according to manufacturers instructions, remove the lid, add in the kale, turn the fire back on to medium, cover and seal the pressure cooker again. Let cook for 7 minutes, depressurize the cooker again.remove the lid, turn the fire back on, add the noodles, and cook for additional 4 minutes, add red pepper flakes and fresh cilantro, turn the fire off serve and enjoy!